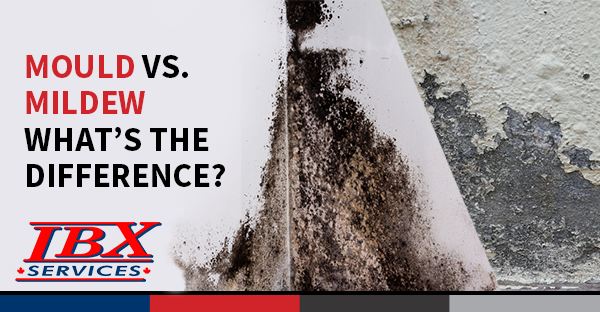 Both mold and mildew can grow in damp areas in homes and outdoors. They need an organic food source, such as drywall, wood, plants, and soil.

Mould can grow on any organic surface in a home. Given enough time, mold can cause materials to rot and destroy the home’s structural components. Mildew grows mostly on plants and can kill them if not removed in time. Mildew is also the name of the plant disease caused by parasitic fungi.

Mould is usually fuzzy or slimy, whereas mildew appears either powdery or downy. Downy mildew is yellow at first and turns to brownish yellow later on. Powdery mildew is white, and then turns yellow and black when it matures.

Mould appears as irregularly shaped spots that can have different colors – blue, green, yellow, brown, gray, black or white. Mildew usually grows in a flat pattern and appears as white, gray, or yellowish patches that turn black or brown over time.

Some molds are beneficial. For example, Penicillium is used to make antibiotics and can also be used in the production of cheese and tofu. Mildew does not have any known benefits.

As mold and mildew thrive in humid environments, it is important to keep properties dry to prevent growth. A dehumidifier should be used to keep humidity at 30-50%, and appliances should be ventilated. Here are more mold prevention tips.

Removing mold and mildew alone can be difficult and risky. For small infected areas – less than three square meters – on surfaces like walls, the mold should be scrubbed with a mixture of household detergent and water. If the affected area is larger than three square meters, the safest and most efficient way to remove the mold is to call a mold remediation company. Here’s why DIY mold removal is not a good idea.

Mildew on plants can be removed by wiping the leaves gently with a dampened paper towel. After each wipe, the paper towel should be freshened. When all the paper’s parts have touched the moldy surfaces, it should be replaced. Any leaves that still have mold visible on them must be cut off.

Among the many kinds of molds that can grow indoors, black mold is one of the most infamous. Here are black mold removal tips. The IBX Services team stands ready to provide professional restoration services to any property affected by the fire, water or mold damage.

IBX Services, a leader in property emergency services, helps families and businesses overcome the devastating setbacks caused by water, fire, mold and other conditions resulting in property damage. Each of our locally owned and operated offices pledges to do whatever it takes to respond, restore and rescue properties in all of the communities we serve.