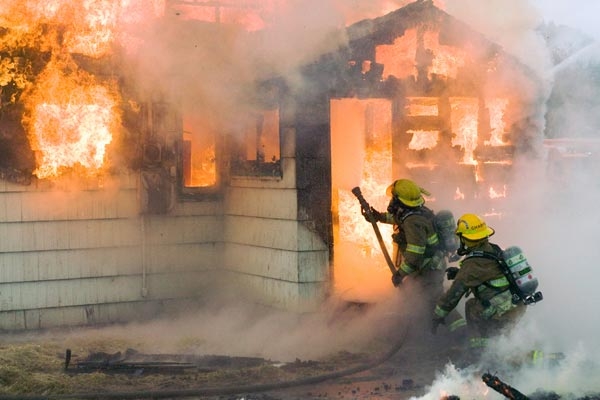 Fire Damage Happens! It only takes half a minute for a small flame to turn into a full-blown life-threatening fire. Learn how you can best protect your home, your loved ones, and your own life. In as little as 30 seconds a small flame can become a major fire that ravages a home and threatens the lives of the people inside.

So what happens in those first few minutes of a fire that allows it to go from manageable to out-of-control? We have broken down the sequence of events in a typical kitchen fire to show how quickly the devastation can spread. Follow along to learn how you can best protect your home, your loved ones, and your own life. 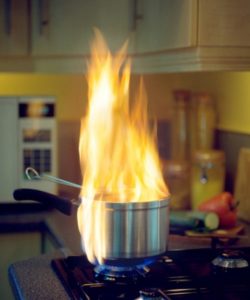 Our house fire example starts on the stovetop since cooking fires account for almost half (44 percent) of all home fires. A few seconds is all it takes for a pot or pan to boil over the rim, spilling flammable oil-laden contents directly onto the cooking flame or red-hot electric burner. In a few hundredths of a second grease or other fatty substances ignite into flames. The flashpoint of many common cooking oils is around 600 degrees F, but when gas or electric burners are placed on high, temperatures can approach 1000 degrees F. 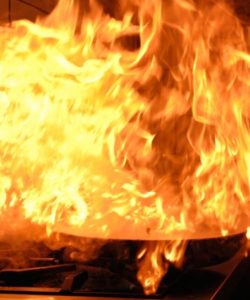 Within seconds of a flame-up, fire easily spreads. Spattered grease or oil residue on a dirty stovetop will ignite, causing flames to travel across the range. Oil residue on cooking utensils also ignite, and other combustibles like paper towels, paper or cardboard packaging, and dry dish towels nearby will begin to smolder or burn. Smoke—a deadly cocktail of hot gases, including carbon dioxide, carbon monoxide, water vapor, hydrogen sulfide and unburned hydrocarbons (i.e., ash or soot)—rises up off the flames with the heated air.

Extinguishing the fire now is crucial: Do not attempt to move the pot or pan—you risk burning yourself and spreading the fire around the room. And never throw water on a cooking fire; that will just spread the greasy flames. Instead, cover the pan with a lid or cookie sheet to deprive the fire of oxygen and put out the flames. 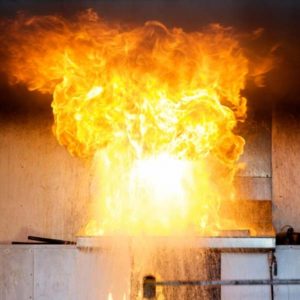 As the fire grows higher and hotter, more flammable objects and furnishings will ignite from spreading flames, including wooden cabinets and countertops, wallpaper, hanging baskets, and curtains. With the fire moving beyond the stovetop and other areas beginning to burn, a denser plume of hot air and smoke rises and spreads across the ceiling.

If you’re still in the room, this hot, smoky air can instantly burn the inside of your breathing passages. Plus, fires generate highly poisonous gases, including carbon monoxide and hydrogen cyanide (created when insulation, carpets, clothing, and plastics burn). Just two or three breaths of it and you could pass out. 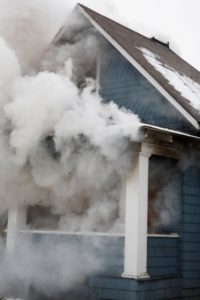 As the flames intensify, the smoke and hot air rising off the fire are more than 190 degrees F. Heat from the fire radiates to other parts of the kitchen, heating up tables, chairs, shelves, and cookbooks.

The hot cloud of smoke thickens and deepens below the ceiling. Cyanide and carbon monoxide levels steadily increase: at 3,400 parts-per-million (typical levels in enclosed room fires) survival time is cut to less than one minute. Carbon monoxide poisoning causes more fire-related deaths than any other toxic product of combustion.

When the smoky layer inches down to the top part of a doorway, an open window or a vent, it quickly streams out of the room. Then the poisonous smoke and heated air travel through hallways and up stairwells to the second floor. 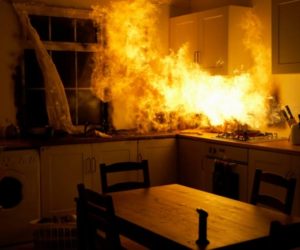 The fire consumes kitchen cabinets, wood countertops and shelves stocked with plastic storage containers and dry goods like cardboard boxes of cereal, crackers, and cookies. More and more heat is generated. The temperature in the upper layer of hot gases rises to 400 degrees F—hot enough to kill people. Compounding the heat is a very dense smoke cloud hovering just a few feet above the floor. It may also include more toxic components like arsenic (used as a wood preservative) and lead (from old paint), as well as irritants like ammonia, oxides of nitrogen, hydrogen chloride and isocyanates.

The fire can now spread by two paths: direct flame contact or by auto-ignition, the temperature at which objects will spontaneously burst into flames without being touched by flames. The auto-ignition temperatures of hard and soft wood used in furnishings and home construction fall between 595 degrees F to 739 degrees F. 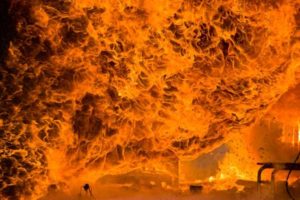 In just 3½ minutes, the heat from a room fire can reach 1100 degrees F. As this happens, flashover occurs. Everything in the room bursts into flames—wood dining table, wood and upholstered chairs, cookbooks, curtains and wall decorations. The oxygen in the room is virtually sucked out (used up during the rapid combustion); glass windows shatter. Balls of fire and flames shoot out windows and doorways. The upstairs fills with thick, hot, noxious smoke and the stairwell is impossible. When you have flashover in a room, temperatures can reach up to 1,400 degrees F—now, all of the other rooms in the house are severely at risk. 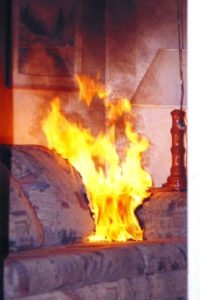 Flames pour through the doorway into the neighboring living room, setting the carpet and upholstered furniture on fire. Synthetics like polyurethane and polyester foam in sofas, pillows and carpets release tremendous amounts of heat. The temperature above the sofa quickly rises to 500 degrees F. Back in the kitchen, the blaze has penetrated the wall and ceiling and flames travel quickly through unseen structural vertical shafts in interior walls and horizontal shafts between floors. Fire spreads to the second floor. 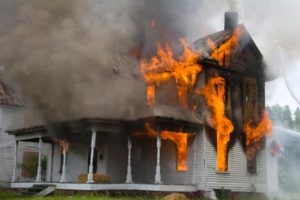 Flames are visible from the street: they travel outside the house through the door and broken windows and into open second story windows. Rescuing anyone still trapped on the second floor may be impossible.

As the blaze in the living room intensifies, the room flashes over. The type of construction materials used to build your home will influence the severity of damage. Synthetics like polyurethane, polystyrene, and PVC used in glues, insulation, and plumbing will auto-ignite at temps between 850 and 1075 degrees. At 1000 degrees F, steel plates used in engineered roof trusses will start to buckle and they lose 40 percent of their load-carrying capacity. Newer homes built with engineered wood can experience floor collapse in as little as 6 minutes. Roof collapse can follow very soon after in an out-of-control blaze. 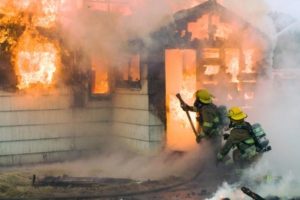 If flames are visible from the outside when firefighters arrive, they immediately go into an aggressive attack strategy trying to ascertain if they can still safely save lives. Next, they direct water to extinguish the blaze at the heart of the fire. Water simultaneously cools the burning debris (lower temps mean fewer flammable gases being generated) and can limit oxygen’s ability to fuel the fire. Firefighters, on average, use nearly 3,000 gallons of water on a house fire. Firefighters may also vent off hot smoke and gases either by breaking open upstairs windows or cutting a hole in the roof. They may also use dry chemicals to retard fire spread and extinguish flames. 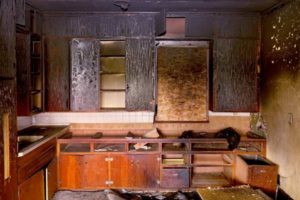 Extensive property damage extends to the entire house. Even in rooms untouched by flames, high heat has softened window glass, melted plastic, caused paint to blister and charred wood. Most appliances are a combination of metal and plastic, so even if they are still standing, chances are they are ruined, with innards melted and destroyed beyond repair. And after flames are an extinguished danger still lurks: many of the burned or melted plastics and synthetic materials in your home will continue to off-gas toxins. It is unsafe for anyone to enter the structure. Likewise, unseen weaknesses in the structure may still cause collapse. 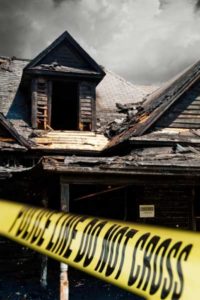 Whether or not your house will be livable after a major fire will depend on many factors, and you will need to obtain permission from the Fire Marshall to reenter your home. Burned or unstable wood in the structure will need to be replaced. After a major fire drywall is left dehydrated and crumbling and will need to be replaced. Given the high temperatures of large fires, most if not all of the home furnishings may be rendered unusable.

Smoke damage will be severe—particles can permeate everything (especially clothing and fabric) and the foul odor is difficult to remove. Even untouched items in storage are at risk. Water from fire hoses may cause further damage to the structure, foundation and furnishings: mold can grow rapidly in wet or damp areas. Ash and soot can stick to floors, walls and furnishings and cause additional damage due to the caustic byproducts present in the burned materials. Expect to need weeks, if not months, to do cleanup and repair before you can bring your family home.